To Be a King (Guardians of Ga'Hoole, #11) by Kathryn Lasky 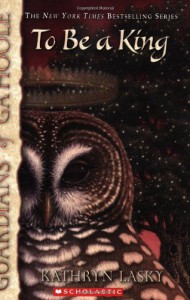 When it comes to the Guardians of Ga'Hoole series, I can't say I'm a fan. Kathryn Lasky and I are just on two totally different pages, so to speak. She's trying to write anthropomorphic fantasy with an anti-racism moral, and it's all coming across as racist and lazy to me--as I've mentioned in previous reviews of the series, the protagonists and their goals are hypocritically prejudiced while the world-building has only the vaguest internal consistency. Both of these factors annoy me to no end.

It's disappointing, because there are a lot of moments over the course of the last eleven books that had the potential to be undeniably awesome... only to be squandered one way or another. Examples:

Lasky built an awesome team of characters... only to eclipse them behind a new protagonist who quickly morphed into a Sue and then a whole new set of prequel characters (in the middle of the series rather than via spin-off).

She writes great battle scenes with (quite appreciated) attention to war tactics... that are few and far between, as well as peppered with preachy nonsense about the protagonists' self-righteous and stereotypical morality.

She sets up two separate groups of villains to facilitate varying shades of morality... and then opts for strict black and white ideals that unreasonably favor her protagonists.

Worst of all, though, is the character of Lutta. In her, Lasky has created an intriguing, morally ambiguous character suffering from lifelong brainwashing and emotional rejection and struggling to resist a buddingWhat Is This Thing You Call Love? epiphany.

See, Lutta is a shape-shifting creature created by a powerful hagsfiend sorceress. She's been sent to steal the Ember of Hoole from King Hoole himself while disguised as his acquaintance, Strix Emerilla. As so many other undercover fictional females seem to do, she starts falling in love with the hero. Ultimately, of course, she's found out as an impostor and met with a brutal Heel Face Door Slam.

She dies with everyone believing that she's a vile, evil beast bent on stealing the ember, and Hoole ends up married to (wait for it...!) Strix Emerilla.

...excuse me? The most heartbreakingly tragic subplot in the entire series is over just like that, with no resolution--and then the Ga'Hoole universe offers up one last slap in the face, having Hoole marry someone who looks exactly like her but isn't "sullied" by any moral ambiguity.

Seriously, just thinking about it's making me angry all over again. I'm really looking forward to being done with this series.