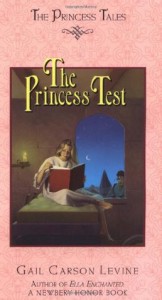 In the interest of perfect honesty, I will confess that I have never read Hans Christian Anderson's The Princess and the Pea. In fact, prior to reading the wikipedia summary (which I did just before sitting down to write this review), all I knew of the story was that there was a princess who for some reason or other had a pea under her mattress.

As such, The Princess Test bored me. It was quirky, which I normally like, but the quirk seemed muffled somehow, like it simply was rather than was something. It wasn't funny. It wasn't quite annoying. It was just there. From the absurd world and its ironic occurrences to the vaguely sarcastic quips of its inhabitants and their own odd character tics, I didn't feel connected or invested at all. Everything that happened was ridiculous, and every character accepted their lot without question or complaint. If the quirks were muffled, the overall tone was restrained.

Perhaps I could have enjoyed it better if I could have enjoyed it from a metaphysical standpoint. As I had only the vaguest familiarity with the original The Princess and the Pea, however, most of what Levine was saying passed me by. Yes, obviously the idea of a princess test is ignorant, but what's your point? I had to wonder. If I'd read The Princess and the Pea first, I wouldn't have wondered.

So maybe I ruined my own enjoyment of this. Who knows? Either way, I think I'll be adding Hans Christian Anderson's The Princess and the Pea to my to-read list. That line in the Wikipedia summary--"In the morning the guest tells her hosts—in a speech colored with double entendres—that she endured a sleepless night, kept awake by something hard in the bed"--certainly makes it sound like something I'd much rather read.